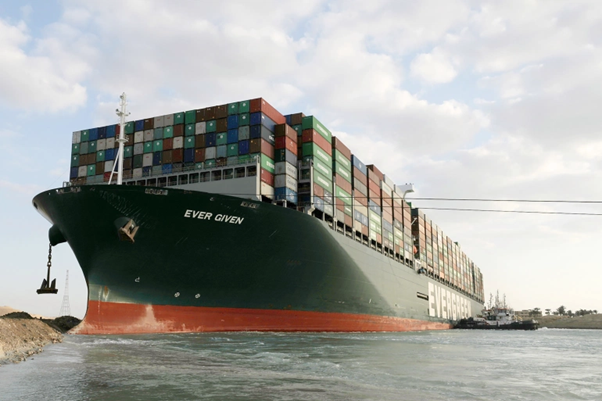 ISMAILIA, Egypt July 4th 2020 (Reuters) – Ever Given, the ship that blocked the Suez canal, to be released after settlement agreed.

The Suez Canal Authority has held the Ever Given and its crew in a lake between two stretches of the waterway since it was dislodged on 29 March. However, the owners and insurers of the Ever Given container ship that blocked the Suez Canal in March have announced that a formal settlement had been agreed in a compensation dispute, and the canal authority said the vessel would be allowed to sail on 7 July.

The Suez Canal Authority (SCA) has held the giant ship and its crew in a lake between two stretches of the waterway since it was dislodged on 29 March, amid a dispute over a demand for compensation by the SCA. The Japanese-owned Ever Given had become stuck in high winds and remained wedged across the canal for six days, disrupting global trade.

The Suez Canal Authority (SCA) initially demanded $916 million in compensation to cover salvage efforts, reputational damage and lost revenue before publicly lowering the request to $550 million. Osama Rabie, the SCA chairman, said the canal would receive a tugboat with a pulling capacity of about 75 tonnes as part of a settlement, without mentioning any other details.

Not only can ocean carriers limit their liability, but they can also actually hold the cargo owner liable under certain circumstances by declaring General Average. General Average is based on equity and has been acknowledged by the laws of all maritime nations. If General Average is declared, you may have to share the financial burden of all cargo lost and/or damaged (even if there is no loss to your cargo), as well as share in the repair or other costs of the vessel itself.

Without insurance, your money could be tied up for ten years before the General Average Adjustment is completed. On the other hand, if you had purchased marine insurance, the insurance company would lodge the guarantee on your behalf, releasing you from this financial burden.

Speak to your Ziegler controller or representative to assist you and secure cover.