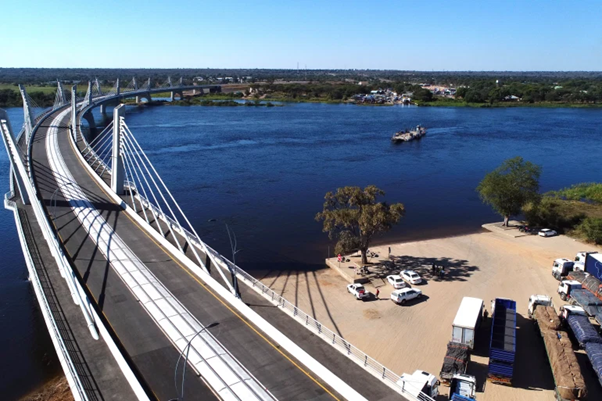 The Kazungula Bridge, seen here, is finally ready to replace the pontoons.

Toll fares have been confirmed https://www.freightnews.co.za/article/border-beat-kazungula-bridge-tolls-announced

The long-delayed structure, straddling the Zambezi due east of its confluence with the Chobe, was completed last September.

However, its primary functionality was already operationally sound much earlier in the year and was used to alleviate congestion on the infamously treacherous ferry crossing between Zambia and Botswana.

The opening of a bridge at Zambia’s Kazungula on Monday, 10 May, should significantly impact South Africa, relieving congestion at the infamous Beitbridge border crossing for freight truckers.

Currently, truckers moving goods from South Africa to Lusaka must travel via Zimbabwe, crossing the notoriously congested Beitbridge at the border between Limpopo and its Northern neighbour. But with the new bridge at Kazungula, South Africans can travel via Botswana, bypassing the Beitbridge crossing – and Zimbabwe.

Reduced dependence on pontoons to cross the river also comes with its challenges as spiking volume through Kazungula could affect nearby border crossings constrained by capacity shortfalls. One of these crossings, he said, was the Martins Drift-Groblersburg transit between Botswana and South Africa, whose single-lane bridge would not be able to cope with increased traffic from Kazungula.

Ziegler South Africa is uniquely positioned to add value through a seamless logistics operation. We are one of the only multinational operators to have border offices in Beitbridge, Groblersbrug and Kopfontein, offering regular land services with neighbouring countries, such as Lesotho, Swaziland, Botswana, Namibia, Zimbabwe, Mozambique, Zambia, Malawi and DRC.

For more information on our border offices email borderinfo@ziegler.co.za or click here.